We’ve wrapped another amazing year for shelter pets with Clear the Shelters! This annual nationwide “Adopt & Donate” campaign is spearheaded by NBCUniversal-owned television stations and in partnership with The Animal Rescue Site and Hill’s Pet Nutrition.

Since its inception in 2015, Clear the Shelters has helped over 694,790 pets find new homes! This year’s numbers are in, and we’re thrilled to share that your donations provided $459,161 to support 227 shelters!

Many animal shelters across the country are facing major pet overpopulation. They report an increase in euthanasia, staffing shortages, and an urgent need for fosters and adopters. These shelters need our help. That’s why we set out to clear space for eight southern shelters, so they could save more pets in need.

We kicked off the campaign with a special life-saving pet airlift for more than 150 at-risk dogs and cats from New Orleans to Morristown, New Jersey, and New Bedford, Massachusetts. This flight transported pets from several overpopulated shelters in Louisiana and included some of the most vulnerable animals, like asymptomatic heartworm positive shelter dogs, homeless cats, and hard-to-place large dogs.

In addition to helping fund the flight mission, The Animal Rescue Site donated much-needed supplies to the participating shelters, and Hill's donated over 6,000 pounds of pet food to support pets at both sending and receiving shelters!

During the campaign, several media outlets like People.com and The Today Show featured animal-related news stories to raise awareness of the importance of pet adoptions, fostering pets, and other ways to support local animal shelters! Plus, we saw celebrities and personalities such as actor Ryan Eggold and Olympic gold medalist April Ross show their support for the campaign!

Your support generated $334,161 for shelters! And, with the $125,000 in matching funds from Hill's Pet Nutrition and Tito's Handmade Vodka, this campaign totaled $459,161 - all of which will be distributed to 227 shelters across the country!

From the bottom of our hearts at Greater Good Charities, thank you for your support for this year’s Clear the Shelters campaign. Your donations made a vital difference for these shelters. Thank you again - we look forward to supporting your shelter next year!

For the second year in a row, Greater Good Charities teamed up with NBC- and Telemundo-owned stations for the nationwide pet adoption drive Clear the Shelters. 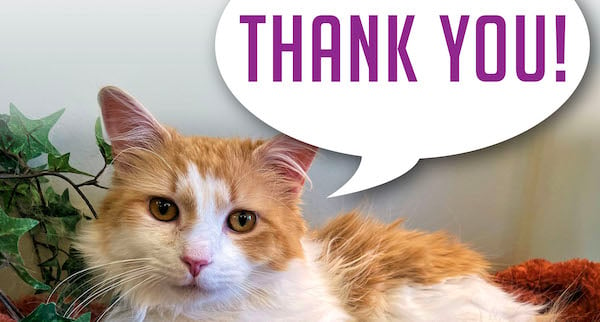 We just wrapped our 7th annual Shelter Bowl campaign and you scored BIG for shelter pets!