Some cats handle being in a shelter better than others. Maybe they were confident and outgoing to begin with, and so after a short adjustment period, they do okay, at least for a while. But often even the outgoing cats lose their confidence, their mojo, and become withdrawn and shut down. Even more cats in shelters are just downright terrified by the strange new environment. They hide in corners, under blankets, facing the wall. Or they hiss and scratch out of fear, or they become over-stimulated to the point of not being able to be handled. 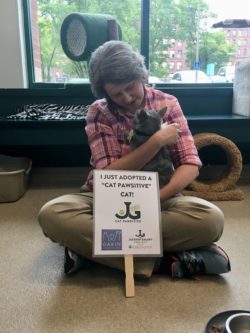 All of these things can keep them from making connections with staff or volunteers or potential adopters. All we’re seeing is their response to being in the shelter; we don’t see the cats’ real personalities. And the longer this lasts, the more likely it is that a cat will regress to a point where she is considered totally unadoptable.

Beyond the impact on the cats, people are affected, too. Shelter staff and volunteers see these cats cowering in the backs of cages, terrified or shut down, or maybe acting inappropriately due to boredom or fear, and they feel crushed, sad, worried. They can feel powerless. They desperately want to help these cats to get adopted but don’t have the tools to make that happen. 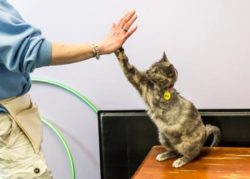 That’s why Cat Pawsitive was created, to be There When It Matters™, for cats and their caregivers. With Cat Pawsitive, shelter staff and volunteers learn to engage with their cats in new ways. They’re empowered by behavior science that helps them look at each cat as an individual with their own particular needs. The training helps the cats to feel safe and secure, gives them mental and physical enrichment that offers them a choice in how to relate to their environment and the people in it and they blossom, they get their mojo back. This, in turn, empowers the caregivers and gives them hope for better outcomes for the cats. The transformations we see, both for cats and for caregiving teams at shelters—they can range from incremental to exponential, and they’re always extremely powerful. Happy tears happen on a regular basis in the Cat Pawsitive program. 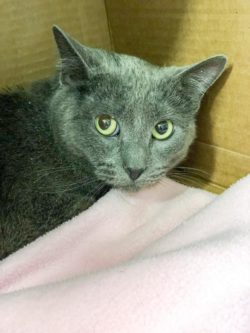 Certain cats stick with you each semester in the Cat Pawsitive program. They become cats that everyone at every participating shelter cheers for and is excited to receive updates—rallying points for the teams. Dorian was one of these cats during the Spring 2018 semester of Cat Pawsitive. But at the beginning of the program, no one knew how Dorian’s story would end. Dorian was brought into Five Acres Animal Shelter in early February, acting for all the world like a semi-feral cat. He spent all of his time hiding in a box in his kennel, hissed any time anyone came near him. He was terrified of strangers, and this was really off-putting and even scary to anyone who came by his kennel because EVERYONE was a stranger at that point. 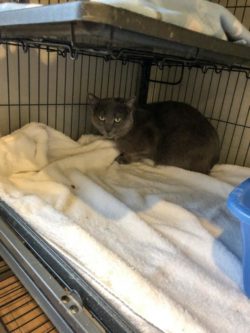 When Five Acres’ Team Leaders, Dana and Nikki, realized that Dorian had started to recognize them a bit (and would calm down after some slow-blinking with them), they decided that he would be a perfect candidate for Cat Pawsitive, our positive-reinforcement-based behavior modification program. They chose to be his primary trainers at first, to help him build confidence. 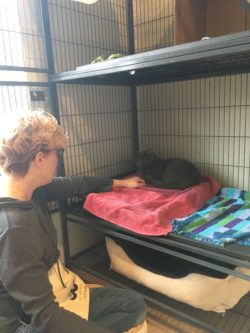 In the beginning, it was kind of rough. Dorian would retreat to his usual hissing and hiding and wasn’t very responsive to training. But slowly he stopped hissing, and he was relaxing around Dana and Nikki (a big win when it comes to a normally terrified cat), and eventually began to hesitantly respond to their training efforts from the comfort of his little cubby hole in a free-roaming cat room. He even let them pet his face! It was when they discovered that the way to Dorian’s heart was through his stomach that he started coming around. While still hiding in his cubby hole, he would poke his head out to touch a target stick and thus get his favorite treat.

With just a little more time, he began to come out of his cubby to get a “touch/treat.” Huge progress. Remember, this was a cat who couldn’t even handle someone opening the door to his kennel before. Now he was actively soliciting interaction from people! He was like a whole new cat! 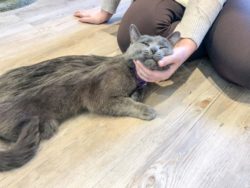 Dana and Nikki were able to introduce new trainers to him, and soon he was walking around the room, enjoying a window perch and learning how to high-five. Next thing they knew, he was purring and rubbing up against potential adopters. When he started playing with other cats and started just being a cat, confident and relaxed in his space; there were lots of joyful tears. 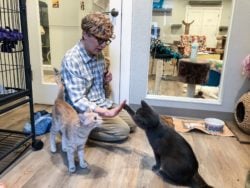 Dorian for the high five!

His training was such a massive success. Cat Pawsitive training taught him to see people as a positive thing, instead of something to be feared. And that training led him to his new home. 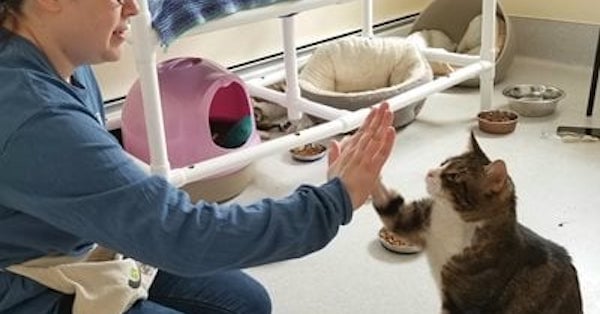 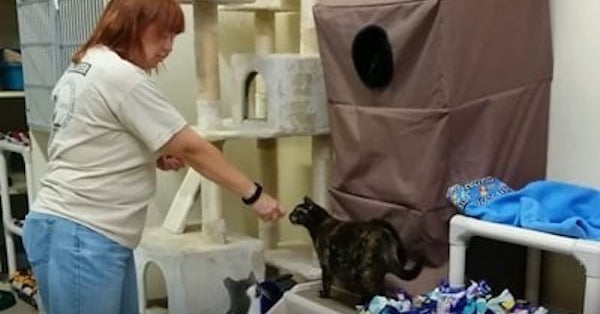 With all the success of CPP in the shelter, team Town Cats doesn’t plan on slowing down anytime soon.