Nothing is more relaxing than kayaking a calm river on a hot day. The noise of the paddle as it gently glides through the pristine waters. The birds chirping as they perch in the trees along the banks. No cares or worries as you let the current take you downstream. There’s no equal to the peace and tranquility that Mother Nature provides in today’s busy and hectic day. 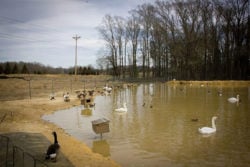 The pond with all of its inhabitants

We had a unique build in Indian Trail, North Carolina at the Carolina Waterfowl Rescue where we actually got to kayak. While at work, even! However, it wasn’t the peaceful scene I described earlier. It wasn’t even close. This build was in January, and so the weather in North Carolina was frigid. The ground was frozen, and the bitter wind was piercing. Everyone was bundled up in layers of clothing which made the simplest of tasks most difficult. We carried on completing one task after the next.

Setting posts into the frozen ground so we could build the perimeter fence, while another group was finishing up the huge barn we constructed that will be used to house the fowl during inclement weather, storage and intake facility. Slowly but surely our list was being completed. We had one more task to finish and that was to build a feeding station on an island inside of a man-made pond. This island acts as a safety retreat in the event a predator starts to chase the fowl; they will be able to find refuge on the island. 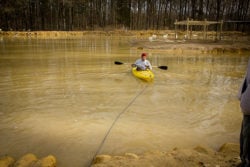 Doug returning from dropping off supplies on the island

Our goal was to build this feeding station on the island, but how does all of our equipment get there? Well, that’s where the kayak comes in to play. Many, many kayak trips to the island were made over the next several days loaded up with tools and materials. 2×4’s, roofing materials and just about anything and everything you could imagine were loaded up a little at a time and kayaked to the island. The water wasn’t as pristine as I remember from my previous kayak trips. This water was red mud mixed with duck feces and feathers. It was rather rank as well.

As you can imagine after so many trips back and forth from the shore to the island, we had several volunteers accidentally “go swimming” while trying to maneuver the kayak through the dark, murky water. The weather was already frigid and then to accidentally flip the kayak over into the water made for a cold, cold day. Fortunately, we had blankets, towels and everyone working on the island was asked to bring extra clothes – just in case. I can’t say enough about our employees and volunteers, though. Through it all, everyone had a great attitude, laughing off the frequent dips in the duck water and coming together for a common goal. We made a great team, and the work we left behind is a great example of how endurance and perseverance can overcome any obstacle – even cold, filthy pond water.

Native to the eastern Himalayas and southwestern China, the red panda is listed as endangered on the IUCN Red List. We’re ready to help! 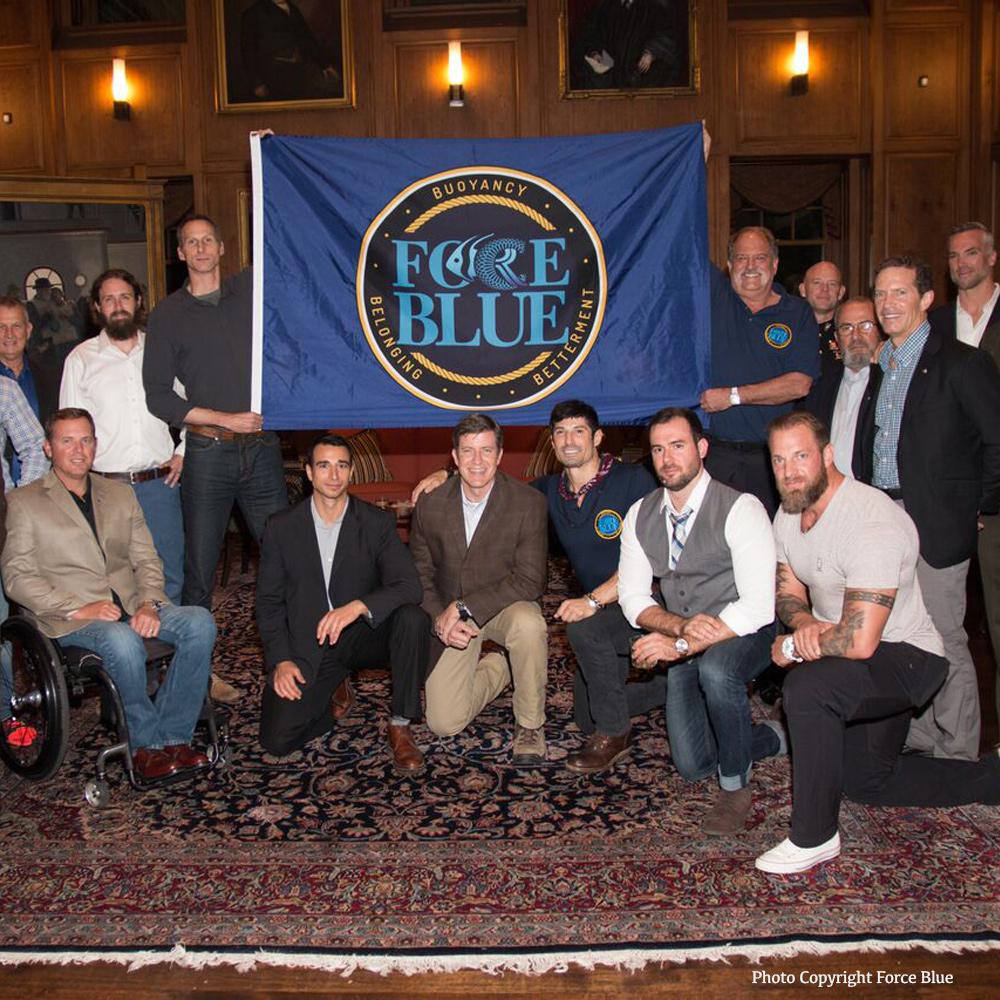